For three years, Authentic sold clothing with Army trademarks. As part of its sales efforts, Authentic entered an agreement with Dwayne “The Rock” Johnson, paying him a significant amount of money to promote Authentic’s Army-branded line. Despite The Rock’s efforts, Authentic’s Army-branded clothing was not successful. The company struggled to make its royalty payments to the Army.  In 2014, the Army, terminated the contract due to unpaid royalties.

Authentic filed suit against the government, alleging that the Army had breached the licensing agreement and its duty of good faith and fair dealing by inhibiting Authentic’s right to fully exploit the Army’s trademarks and by refusing to approve advertising featuring The Rock. The Army counterclaimed for the nonpayment of royalties. Both parties moved for summary judgment.

A Previous Licensing Agreement Did Not Control

Authentic argued in its summary judgment motion that the Army breached the 2010 agreement’s covenant of good faith and fair dealing by not approving the use of trademarks in the manner it had under the 2007 agreement.

The court rejected this argument, reasoning that the 2010 agreement was a different contract between different entities. The 2010 agreement did not reference the 2007 agreement nor the Army’s prior relationship with All American. What’s more, the 2010 agreement had an integration clause that prohibited the court from relying on evidence of the parties’ prior dealings to interpret the agreement’s provisions.

The Army Reasonably Rejected Authentic’s Use of its Trademarks 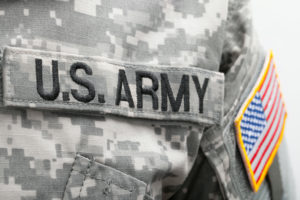 Authentic also alleged the that Army breached the licensing agreement by denying the company the right to exploit the Army’s trademarks. The court reviewed the various instances in which the Army rejected Authentic’s designs and found that they were all reasonable.

The Army rejected designs due to, among other things, overlapping logos, implying that products were manufactured by the Army, lack of prominence of the Army logo, use of unapproved marks, and factually incorrect designs—e.g., designs using Navy colors, or that implied that the Army, not the Marines, raised the flag at Iwo Jima. In other instances, the Army rejected designs because the emblems had more to do with a county fair fantasy version of the Army—motorcycles, snakes, scorpions—than the actual Army. In all of these cases, the court found, the Army was well within its discretion in rejecting the designs.

The Morale, Welfare, and Recreation Program

Authentic further contended that the Army breached the licensing agreement by refusing to permit the company to truthfully advertise that purchases of the Army-branded clothing would support the Morale, Welfare, and Recreation program, which provides leisure services to soldiers, their families, and military retirees.

But the court found that the Army did not irrationally refuse to allow Authentic to refer to the program. The record showed that Authentic wanted to make incorrect claims about the program, suggesting it was a charity and that royalty payments made the Army under the licensing agreement were partly charitable donations. The MWR program, however, was not a charity; it’s a government organization that receives funding from appropriated funds and commercial sponsorships. The Army rightly rejected Authentic’s attempts to describe the program as philanthropic and to make it a prominent part of the promotional campaign.

The court was unpersuaded. As an initial matter, it did not appear that the Army had unduly delayed in approving the Samsung deal. Rather, the problem was that Authentic and Samsung failed to provide the Army with a tangible agreement that could be approved. Regardless, the Army’s duty of good faith and fair dealing under the license agreement did not require it to approve Authentic’s separate agreement with Samsung. The Army was not responsible for Authentic’s financing, and the licensing agreement did not even reference financing. Authentic alleged that Army breached the licensing agreement by refusing to approve promotional videos that the company made featuring The Rock. Indeed, Authentic contended that its inability to exploit The Rock effectively killed the Army-branded line.

The court, however, found that the Army reasonably declined to approve Authentic’s promotional videos. In one of the videos featuring The Rock, one of the actor’s exclaimed “Stand down soldier.” The Army rejected this video because “stand down soldier” was not really an Army expression, and it was degrading to soldiers. In another video with The Rock, Authentic improperly suggested that the clothing was Army-owned, and that Authentic was an Army-Brand outfitter. To make matters worse, Authentic had uploaded this video up on its website before even seeking the approval from the Army.

As part of the 2007 agreement with All American, the Army had approved the use of a First Infantry insignia on women’s clothing. The clothing never sold that well. By the time Authentic entered an agreement with the Army, the women’s garments were sitting in a warehouse in California.

In order to raise much needed cash, Authentic’s principal, who had previously been All American’s president, orally assigned Authentic the right to sell the the All American womenswear. Authentic wanted to remove the First Infantry insignia from the clothing, but the Army refused to allow removal of the insignia for resale. Authentic argued that this refusal constituted a breach of the duty of good faith and fair dealing.

The court was unpersuaded. The womenswear clothing was subject to the 2007 agreement and a bankruptcy court order. The 2010 agreement, to which Authentic was a party, did not encompass or even mention the clothing. Because the 2010 agreement did not cover this clothing, the Army did not owe any implied duty of good faith to Authentic with respect to that clothing.

In a somewhat peculiar move, Authentic asked the court to grant the Army summary judgment on its counterclaim for unpaid royalties. The court entered judgement on liability for the unpaid royalties but deferred judgment on the amount due pending further development of the record.